Pentecost is not really the weekend you want to go hiking, especially not in times of a pandemic, when everyone seems to be out there somehow, but we couldn’t let it be taken away either. Sometimes there were three of us, sometimes two, sometimes I was alone, but all the hikes were nice.

We met at the parking lot near the Pielitzhöhe. Along the circular route Großpostwitzer, through Weigsdorf, past the Matschenberg and Mordteich, we continued to follow the Oberlausitzer Bergweg always towards Bieleboh, our first destination. From the lookout tower on the Bieleboh you not only have a wonderful view, but you also get a view as far as the Krkonoše Mountains.

As we were already on the way up to here and it was already at noon time, we also did not miss the opportunity to have a break in the restaurant there, have something to eat, something to drink and enjoy the bright sun. Strengthening is a must, after all we had only covered a good third of the distance.

We continued along the circular route Cunewalde up to the opposite Czorneboh, from which there is also a beautiful view over the observation tower.

And also in the restaurant at the Czorneboh we allowed ourselves a cool drink before we went back the last small piece.

Actually I wanted to take a day off from hiking today, but when I was already awake at seven in the morning, I spontaneously decided after a quick look at the weather that it probably won’t be like that after all. With planned 9 km it should be only a short comfortable walk. Nothing extreme, just being out a bit. Because I had recently seen pictures of the Königshain hills and they had made me curious, I decided to start in this direction. So shortly after eight o’clock I got off to the one hour drive.

Shortly after nine I started from the nearby parking lot, first along the road up the hill, where after a short time a path led off to the right to the old quarry. I already knew what to expect there, but when I took my first look at the ponds in the quarry, I was stunned. Somehow it totally overwhelmed me.

While I was standing there, two police officers came by who were called because people had pitched their tents there. After I was reassured that they are not looking for me (not that there is a reason), I had a little talk with them and took the chance to get some questions answered. Yes, only with a sleeping bag you are allowed to lay down and sleep there, swimming is also allowed, but you should not jump in from the cliffs, because there are still many stone blocks in the water which you cannot see or estimate the depth correctly. Nevertheless, I did not want to miss the opportunity to sit down at the one cliff to show my middle finger to my fear of depth.

Further over across country I continued my way through the quarry, which not only revealed the beautiful ponds, but also brought forth witnesses of that time, like ruins and tools.

After 2.5 h I had done the first 2.5 km and decided, also due to the increased number of other people, to continue my way and go a round through the woods. Along the Way of St. James and the Pilgrim Stone I followed the hiking trail Thiemendorf-Meuselwitz up to the Teufelsstein.

Continuing over the Hochstein, I went down again past the royal quarry Nirwana and a cow pasture back to the parking lot, where I finished my round after four hours.

In preparation for the Häntzschelstiege (and to avoid the crowds of people there today) we went up to the Starken Stiege right after the start in Schmilka. The staircase climbs about 40 hm, without any safety device, but with metal handles to make the ascent easier.

Unfortunately, this fun was over after only a short time and we followed the Upper Terrace Path along the sandstone cliffs further on, in order to also catch the upper part of the Holy Staircase. Further along the Malerweg everything went downhill again, only to climb up again through the Wilde Hölle to the Carolafelsen. Even if the many people at the Carolafelsen bothered me a little, we did not miss the opportunity to take a break after the ascent and enjoy the view.

Along the Reitsteig we walked further over the Großer Winterberg down the border path back to Schmilka, where we enjoyed an ice cream close to the end. 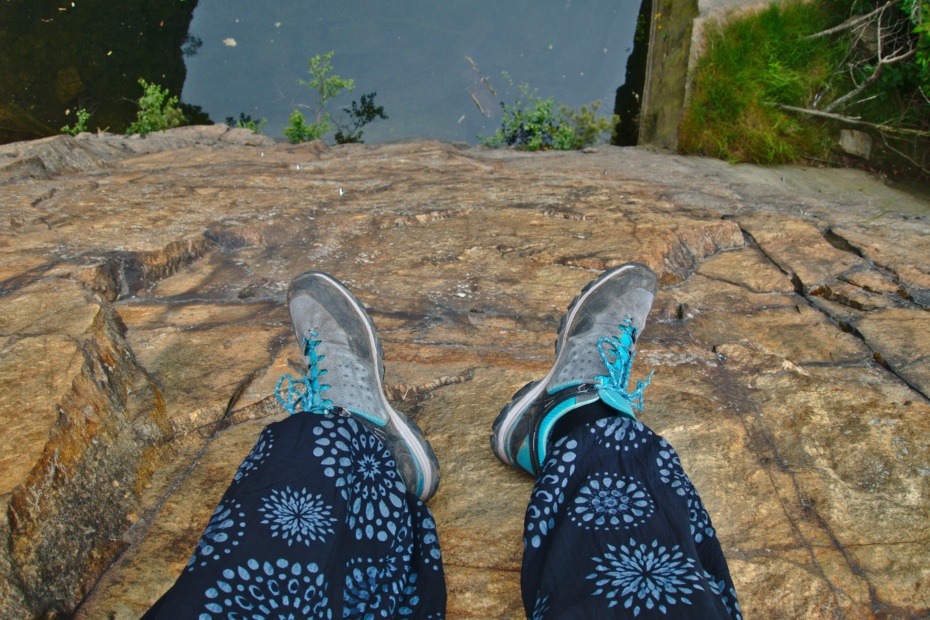