Today was supposed to be a special day with a special challenge. A 22 km hike? No, that’s not a challenge anymore. Carrying about 6 kg on your back? I want to get used to it, with tendency to carry even a bit more. Over a thousand meters of altitude? That’s more like it. Keeping the heart rate below 160? That could be really difficult, or is good preparation everything?

Again and again I have to fight my way up the mountain, take breaks and breathe deeply. After a while I noticed that it’s always the hardest or impossible to go on when my heart rate goes over 160. For a long time I thought that I just had to slow down and take it easy, but unfortunately this was not always enough. One week before it happened again: While we were walking up the Lehnsteig, my pulse was often between 160 and 174 than it is good for me. Again and again I had to take a break, take a deep breath and let the others wait for me. One of my companions looked at me and said a sentence that changed my mind very quickly, very much: “Maybe you just have to postpone the Tatra for next year! – What? Absolutely not! There is one mountain, I hear its calling, I want to go there and I will go up there. This year. Absolutely. At least if it’s the country borders play along, but not because I’m not fit enough. That one sentence just wouldn’t get out of my head the whole day. But I also knew that with my fitness level I would not be able to get up there that easily. How could I get up to over 2000 meters when I was almost dying on the Großer Winterberg?

The day passed and it was Sunday. I sat at home, had time to think and made a hard decision. If I want to go up to the Tatra in summer, there is only one solution: I have to quit smoking immediately and without any ifs. So I quit on Monday. And no, it sounds much easier than it is.

So on Sunday, after almost a week without smoking, we started hiking and I was already curious if this one week would have any effect. I was prepared that there would be no big miracles and that I would run up the mountain, but would it be enough for me to notice a difference, no matter how small it is?

So we started at half past eight from the parking lot in Schmilka and walked along the river Elbe. A light warm up is surely not bad before we start the steepest ascent of Saxon Switzerland. And then we started, up the mountain, steps, as you know it. Yes, I had to take a break after a short time, but only to take off half of my clothes. Even though it rained a little bit, it was a oppressive heat and as always I was dressed much too warm. But then it went on… and on… and on. Up to the Großer Winterberg. While my legs were still very tired from yesterday’s training and had to fight a little bit, at the same time there were other effects. My heart seemed to be more relaxed. With a maximum heart rate of 157, I went up the mountain without having to take a break. Sure, you stop sometimes to take a photo or to enjoy the nature a little bit, but I never had that unpleasant feeling that I was afraid of having to live with or to train for a long time to get better.

And what do you do when you have reached the highest point? Exactly, everything down again. In the direction of the Zeughaus we started from the Großer Winterberg, but this time not along the Malerweg along the Goldstein, but over the Richterschlüchte. Until shortly before the Zeughaus, where I was already looking forward to the refreshments. However, I had to earn it first, because before the time came, the Teichstein was still waiting for us. I have seen it from below several times, but I have never been up there. We wanted to change that today. This ascent was difficult because there were so many bushes with delicious blueberries everywhere and I was hungry. Again and again I stopped to pick some, because what is better than the fruits directly from nature? Nothing! With blue hands, tongue and probably stains on my face, I arrived at the top at some point as well. This was definitely the tastiest climb so far! And in addition this wonderful view, which one could not enjoy so much due to the bad weather, was still very nice. And with the view down to the Zeughaus, we didn’t stay too long before we got to the food and before I still ate all the bushes!

I had walked the way from the Goldsteinaussicht to the Zeughaus several times and I was very happy every time that I could walk down this steep path. Until today. Today it went exactly this way uphill. “Because the path is equally steep, I can imagine that it is also pleasant to go up”, were the words of my hiking mentor the week before. And he was not wrong. So we went up and also this time we stayed for a moment at the Goldsteinaussicht. I had once said that I don’t like to go to the same places twice, but exactly such views have taught me, how nice it can be to return to known places and still discover something new again and again.

Over narrow paths, small trails and passing many delicious bushes, we looked for a view that is obviously not very well known and above all well hidden. I did not immediately recognize the rock in front of us, which is actually known to me, but for the first time in a year I looked down on the Winterstein and stood at the rock, which I usually only looked at from there. Very happy that I was standing on this side, because as it looked like, the Winterstein was very popular today.

Since this view was a dead end, we had to go back a bit to follow the actual path. And then a big decision came. Either continue along the comfortable path or go down again and up again for the third time today, the one path that somehow stayed in my memory, with the one big stone on which one could have such a nice break. Since I really wanted to challange myself today, we went down. And up the ascent to the Kleiner Winterberg. Then we realized that 40 m are still missing to reach the 1000 height meters. So again up to the Großer Winterberg.

For the first time I decided that I want to try to walk the last 4 km in barefoot shoes. From now everything is downhill and the path is mostly soft. So I took off my 800g mountain shoes and put on the very light barefoot shoes. It felt like dancing, so much weight, that now no more was hanging on my feet, just wonderful.

Back in Schmilka we allowed ourselves a drink and an ice cream just before our journey home. After this challanging day, I would say, we had earned it abundantly.

Conclusion: With one small exception, I was able to keep my heart rate under 160 and didn’t even have to take a break. I did go a bit slower sometimes, but I didn’t stop. Being able to experience such success after only one week strengthens my will to finally become smoke-free after almost 20 years. It will not be easy, but as the saying goes: Where there is a will, there is a way! 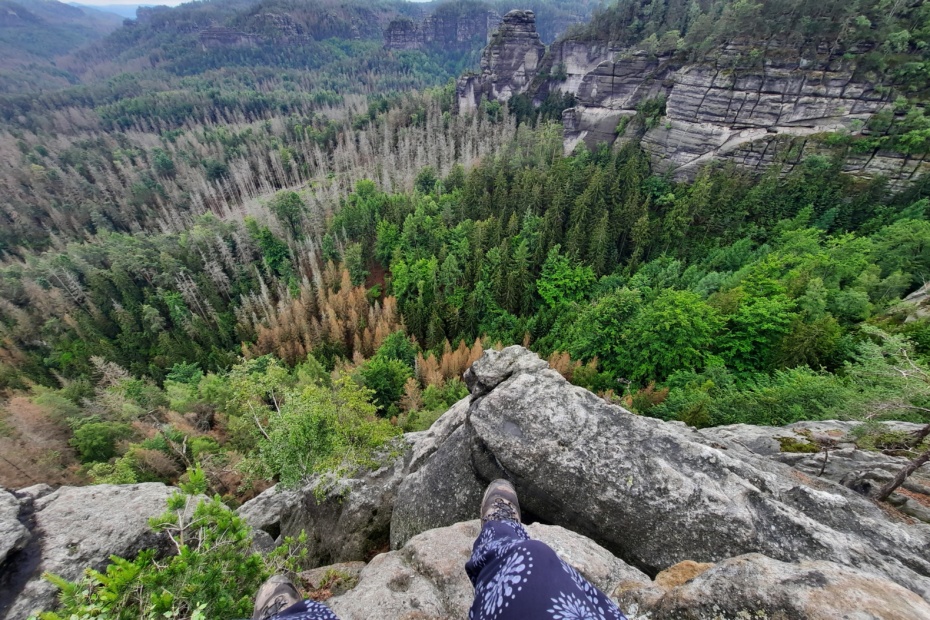